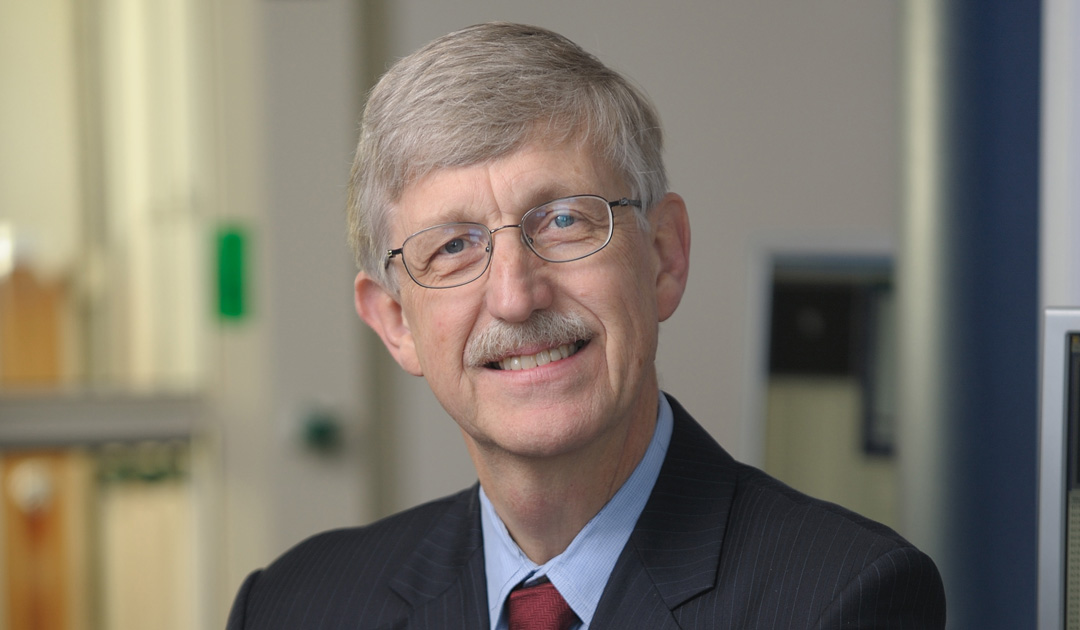 WEST CONSHOHOCKEN, PA — Geneticist and physician Francis Collins, Director of the National Institutes of Health, who led the Human Genome Project to its successful completion in 2003 and throughout his career has advocated for the integration of faith and reason, was announced today as the 2020 Templeton Prize Laureate.

In his scientific leadership, public speaking, and popular writing, including his bestselling 2006 book, The Language of God, Collins has demonstrated how religious faith can motivate and inspire rigorous scientific research. “This book argues that belief in God can be an entirely rational choice,” he writes in the introduction, “and that the principles of faith are, in fact, complementary with the principles of science.” In the book, he endeavors to encourage religious communities to embrace the latest discoveries of genetics and the biomedical sciences as insights to enrich and enlarge their faith.

Collins, 70, was selected as the 2020 Laureate by the Prize judges late last year, but the announcement was delayed due to the coronavirus pandemic.

From 1993 to 2008, Collins directed the National Human Genome Research Institute, guiding the Human Genome Project in its mapping and sequencing of the three billion DNA letters that make up the human genetic instruction book.

Before joining the NIH, Collins served as professor of internal medicine and human genetics at the University of Michigan, where he was known as the “gene hunter” for his pioneering technique of “positional cloning” to pinpoint disease-related genes. His research groups have been responsible for the discovery of the genes responsible for cystic fibrosis, neurofibromatosis, Huntington’s disease, and Hutchinson-Guilford progeria syndrome, a rare form of premature aging.

These and other genetic breakthroughs have helped launch a new era of precision medicine in which researchers and providers can customize treatment programs for individual patients, and have shed new light on human well-being and the nature and possibilities of the human species.

The Templeton Prize, valued at 1.1 million British pounds, is one of the world’s largest annual individual awards, and honors individuals whose exemplary achievements advance Sir John Templeton’s philanthropic vision: harnessing the power of the sciences to explore the deepest questions of the universe and humankind’s place and purpose within it.

In a statement prepared for the announcement, at www.templetonprize.org, Dr. Collins said: “As I write this, almost my every waking moment is consumed by the effort to find treatments and a vaccine for COVID-19. The elegant complexity of human biology constantly creates in me a sense of awe. Yet I grieve at the suffering and death I see all around, and at times I confess I am assailed by doubts about how a loving God would permit such tragedies. But then I remember that the God who hung on the cross is intimately familiar with suffering. I learn and re-learn that God never promised freedom from suffering – but rather to be “our refuge and strength, a very present help in trouble” (Psalm 46).”

Heather Templeton Dill, president of the John Templeton Foundation, in a prepared statement at www.templetonprize.org, said: “In his role as a scientist, government official, and public intellectual, Francis Collins has used his platform to engage groups of diverse perspectives, and encouraged greater curiosity, open-mindedness, and humility among scientists and religious believers with the aim of illuminating a pathway toward, as he has written, ‘a sober and intellectually honest integration’ of the scientific and spiritual perspectives. Dr. Collins embodies the ideals and core convictions that inspired my grandfather, Sir John Templeton, to establish the Templeton Prize in 1972: that rigorous research, especially in the sciences, can help humanity confront the deepest and most challenging questions of existence.”

Templeton, the investor and philanthropist who died in 2008, created the Templeton Prize because he wanted to recognize discoveries that yielded new insights about religion especially through science, and he set the award amount above that of the Nobel Prizes in order to recognize the importance of what he called “progress in religion.”

His understanding of progress in religion evolved during his lifetime and is shown in the variety among the 50 Laureates who have received the Prize. Winners have come from all major faiths and dozens of countries and have included Nobel Prize winners, philosophers, theoretical physicists, and one canonized saint. For the first few decades of the Prize, HRH Prince Philip presented the award, and distinguished leaders such as Prime Minister Margaret Thatcher and Presidents George H.W. Bush and Gerald Ford served as judges.

This year, the Templeton philanthropies updated the description of the Prize, focusing it on research, discovery, public engagement, and religious leadership that advance understanding of and appreciation for the insights of science.

Francis Sellers Collins, M.D., Ph.D., was born in Staunton, Virginia, to parents who sought to raise him in an idealized agrarian lifestyle, homeschooling him until he was 10 on a farm in the Shenandoah Valley. He received a Bachelor of Science in chemistry from the University of Virginia and a Ph.D. in physical chemistry from Yale. A biochemistry course, however, opened his eyes to the revolutionary possibilities emerging in the field, and led him to shift his career path and enroll in medical school at the University of North Carolina, Chapel Hill.

In his youth, Collins wrestled with issues of religion, veering from comfortable agnosticism to unapologetic atheism. But while a third-year medical student serving his residency, he was struck by the power of faith professed by his patients, many of whom faced imminent death. Unable to articulate his own belief, a neighbor, a Methodist minister, introduced him to the writings of C.S. Lewis, the legendary Oxford scholar who himself had tested the tenets of faith through the lens of logic before embracing Christianity. Collins’s journey to Christian belief would evolve and strengthen over the next three decades.

After serving his residency and earning an M.D., Collins was named a Fellow in Human Genetics at Yale Medical School under the direction of Sherman Weissman, who still serves as the school’s Sterling Professor of Genetics. In Weissman’s lab, Collins developed the technique of “chromosome jumping”, allowing the cloning of an entire genetic strand by skipping over lengthy, perhaps unsearchable parts of the strand without going through the sequence gene by gene in order to read the entire strand.

After nine years at the University of Michigan where he became the school’s Howard Hughes Medical Institute Investigator, he was appointed director of the National Center for Human Genome Research in 1993. There he was responsible for the Human Genome Project, an international consortium which remains the largest biological collaboration project in history. He resigned his position in 2008 but continued to lead an active laboratory focused on progeria and type 2 diabetes.

The Language of God: A Scientist Presents Evidence for Belief, Collins’s first book for a general audience, was published in 2006. In it, he recounts his journey from agnosticism to atheism to Christian belief, explaining why science does not conflict with the Bible, and outlining how modern science and robust personal faith can reinforce each other. Collins has said he was astounded by the response to the book – it was a New York Times bestseller for 16 weeks and has been translated into 24 languages.

In response to that overwhelming interest, and seeing the need to create a platform for further dialogue about science and religion, Collins and his wife, Diane Baker, founded the non-profit BioLogos in 2007, to foster discussion about harmony between science and biblical faith. The organization publishes articles and podcasts from scientists who are also Christians and promotes the view that an evolutionary creation position is correct and compatible with Christianity.

In 2009, newly-inaugurated President Barack Obama nominated Collins as the 16th director of the National Institutes of Health.  He received unanimous Senate confirmation, and was reappointed to the position by President Donald Trump in 2017.  He is the longest-serving director in the agency’s history.

Collins has written three other books aimed at a general audience: The Language of Life: DNA and the Revolution in Personalized Medicine and Belief: Readings on the Reasons for Faith, both in 2010, and The Language of Science and Faith: Straight Answers to Genuine Questions, in 2011.

Among the many initiatives launched under Collins’s direction at NIH are “BRAIN: Brain Research through Advancing Innovative Neurotechnologies,” to develop tools to examine the brain’s cells and circuits; “Sound Health: Music and the Mind,” examining how music can have health and wellness applications; and “HEAL: Helping to End Addiction Long Term,” in response to the national opioid crisis.

In early 2020, Collins and his NIH colleagues shifted major parts of their attention and resources to accelerating treatments and a vaccine for the novel coronavirus causing a global pandemic.

Throughout the COVID-19 pandemic, Collins has urged faith communities to trust science while debunking various internet conspiracies, to link inevitable bad news to opportunities for hope, and to remain strong in their faith. In a recent Washington Post interview, he referenced a favorite verse from Joshua 1:9: “Have I not commanded you? Be strong and courageous. Do not be afraid. Do not be discouraged, for the Lord your God will be with you wherever you go.”

“That encourages me,” said Collins, “and faith leaders can spread that kind of exaltation around in a way that I think will encourage others.”

Collins and his wife, Diane Baker, a founding faculty member and director of the genetic counseling program at the University of Michigan, live in Chevy Chase, Maryland.

Collins joins a list of 50 Prize recipients including Mother Teresa (the inaugural award in 1973), the Dalai Lama (2012), and Archbishop Desmond Tutu (2013). Last year’s Templeton Prize went to theoretical physicist Marcelo Gleiser for his writings that present science, philosophy, and spirituality as complementary expressions of humanity’s need to embrace mystery and the unknown.  The 2018 Laureate was His Majesty King Abdullah II of Jordan for his efforts to promote peace-affirming Islam and to seek religious harmony within Islam and between Islam and other religions. Other scientists who have won the Prize include Martin Rees (2011), John Barrow (2006), George Ellis (2004), the late Freeman Dyson (2000), and Paul Davies (1995).

Francis Collins will formally receive the Templeton Prize in a virtual ceremony later this year.