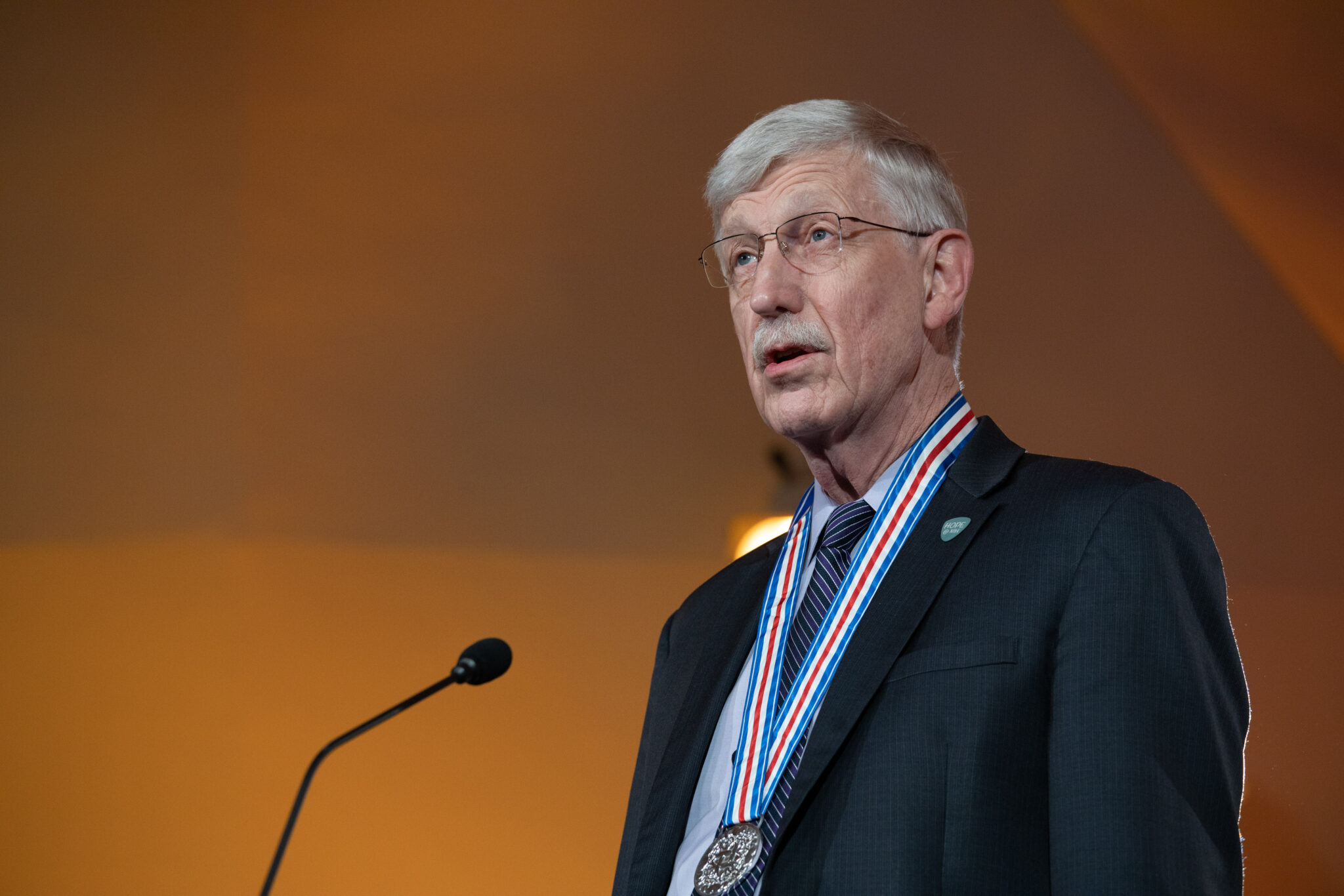 “In Praise of Harmony”

WASHINGTON, DC — Geneticist and physician Francis Collins, Director of the National Institutes of Health, who led the Human Genome Project to its successful completion in 2003 and throughout his career has advocated for the integration of faith and reason, was awarded the 2020 Templeton Prize this evening in a largely virtual ceremony at the National Academy of Sciences Building in Washington, D.C.

In his Templeton Prize address delivered on the stage of the Fred Kavli Auditorium, Dr. Collins said: “For my theme this evening, I have chosen to speak about a phenomenon that I believe ought to attract our interest and devotion, but which seems to have suffered some significant downgrading.  The phenomenon I speak of is Harmony.  I first learned about that term as it applies to music….but harmony applies in other realms as well.  It is to be contrasted with dissonance.  In many areas of current experience, harmony seems to have lost out to dissonance and polarization.  We have a lot of dissonance in our current experience.  We need to resolve that.  We need more harmony.

First, we need a renewed commitment to truth and reason.  Of all the developments that cause me concern over the past few years, none is greater than the growing disregard of maintaining a high standard of objective truth.  We have no future as a society if we abandon that framework.

Second, we need to address the growing spiritual void that leaves many of us adrift, unmoored, feeling precarious.  We need to be re-anchored in those ancient spiritual truths that provide a rock upon which we can build our future.

And third, and most importantly, we need to return to our calling to love one another.  Not just those who agree with us, but also our enemies.  Love is stronger than hate.  You cannot pray regularly for someone and continue to despise them.  One of my favorite verses about love comes from Colossians 3:12: ‘Therefore, as God’s chosen people, holy and dearly loved, clothe yourselves with compassion, kindness, humility, gentleness, and patience.  Bear with each other and forgive whatever grievances you may have against one another.  Forgive as the Lord forgave you.  And over all these virtues put on love, which binds them all together in perfect unity.’  Can you imagine what would happen to our fractured society if we all tried to live out this exhortation?”

Heather Templeton Dill, president of the John Templeton Foundation, said: “From the perspective of the Templeton Philanthropies, Francis Collins embodies the ideals and core convictions that inspired my grandfather, Sir John Templeton, to establish the Templeton Prize in 1972: that rigorous research, especially in the sciences, and the effective communication of that research can help humanity confront the deepest and most challenging questions of existence.  Throughout his long career, Dr. Collins has advocated for the integration of faith and reason, demonstrating how religious faith can inform and inspire a rigorous quest for knowledge of the natural world through the sciences.”

The Ceremony was hosted by Jennifer Templeton Simpson, Chair of the Board of the John Templeton Foundation and the Templeton World Charity Foundation.

Speakers during the ceremony on video included:

The American soprano, Renée Fleming, who has worked with Collins in the NIH initiative, “Sound Health: Music and the Mind,” sang the Giacomo Puccini aria, “O mio babbino caro,” also on video, and joined Collins in a video duet of Stephen Foster’s 1854 song, “Hard Times Come Again No More,” to close the ceremony.

The Templeton Prize, valued at 1.1 million British pounds, is one of the world’s largest annual individual awards, and honors individuals whose exemplary achievements advance Sir John Templeton’s philanthropic vision: harnessing the power of the sciences to explore the deepest questions of the universe and humankind’s place and purpose within it.

Dr. Collins was announced as the 2020 Templeton Prize Laureate on May 20 by the three Templeton philanthropies: the John Templeton Foundation, based in West Conshohocken, Pennsylvania, and by the Templeton World Charity Foundation and Templeton Religion Trust, based in Nassau, The Bahamas.

He joins a list of 50 Prize recipients including Mother Teresa (the inaugural award in 1973), the Dalai Lama (2012), and Archbishop Desmond Tutu (2013).  Last year’s Prize went to theoretical physicist Marcelo Gleiser for his writings that present science, philosophy, and spirituality as complementary expressions of humanity’s need to embrace mystery and the unknown.  The 2018 Laureate was His Majesty King Abdullah II of Jordan for his efforts to promote peace-affirming Islam and to seek religious harmony within Islam and between Islam and other religions. Other scientists who have won the Prize include Martin Rees (2011), John Barrow (2006), George Ellis (2004), the late Freeman Dyson (2000), and Paul Davies (1995).