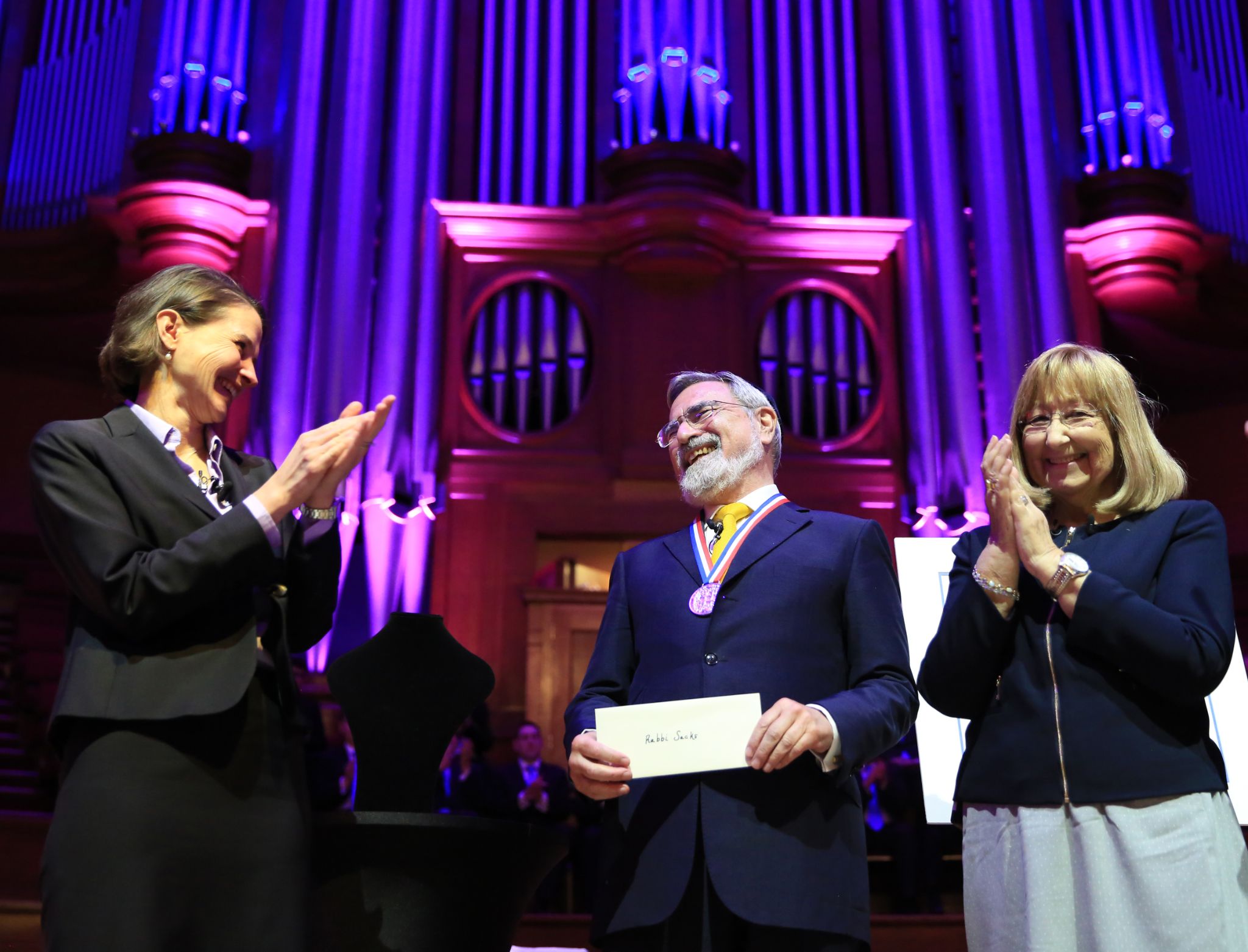 The Templeton Philanthropies mourn the sudden and unexpected passing of Rabbi Lord Jonathan Sacks, the 2016 Templeton Prize Laureate. He died on November 7 at the age of 72.  A statement from his office on October 15 announced that he was undergoing treatment for a recent diagnosis of cancer.

Rabbi Lord Jonathan Sacks was the Chief Rabbi of the United Hebrew Congregations of the Commonwealth from 1991 until his retirement in 2013. He spent decades bringing spiritual insight to the public conversation through mass media, popular lectures, and more than 30 books.

Rabbi Lord Sacks first gained attention by leading what many consider to be the revitalization of Britain’s Jewish community during his service as Chief Rabbi, a feat he accomplished in the face of dwindling congregations and growing secularization across Europe. During his tenure he catalyzed a network of organizations that introduced a Jewish focus in areas including business, women’s issues, and education, and urged British Jewry to turn outward to share the ethics of their faith with the broader community.

Central to his message was appreciation and respect of all faiths, with an emphasis that recognizing the values of each is the only path to effectively combat the global rise of violence and terrorism.

At the news conference announcing him as the Prize Laureate at the British Academy in London on March 2, 2016, Jennifer Templeton Simpson, Chair of the Board of the John Templeton Foundation and the Templeton World Charity Foundation, noted that Rabbi Sacks epitomized future-mindedness, a characteristic revered by Sir John Templeton, who established the Prize in 1972.  “After 9/11, Rabbi Sacks saw the need for a response to the challenge posed by radicalization and extremism and he did so with dignity and grace,” she said. “He saw the need for the strengthening of ethics in the marketplace long before the financial crisis. He has always been ahead of his time and, thanks to his leadership, the world can look to the future with hope.”

In nominating Rabbi Sacks for the Prize, the former Archbishop of Canterbury Lord George Carey wrote: “There are public intellectuals and religious leaders, but few who are both at the same time. There are academic scholars and popular communicators, but he is both, reaching out far beyond his own constituency through the spoken, written, and broadcast word.”

The Templeton Prize ceremony honoring Rabbi Lord Jonathan Sacks was held at Central Hall Westminster on May 26, 2016.  In his remarks that evening, Rabbi Lord Sacks said:

“You can’t outsource conscience. You can’t delegate moral responsibility away. When you do, you raise expectations that cannot be met. And when, inevitably, they are not met, society becomes freighted with disappointment, anger, fear, resentment and blame. People start to take refuge in magical thinking, which today takes one of four forms: the far right, the far left, religious extremism and aggressive secularism. The far right seeks a return to a golden past that never was. The far left seeks a utopian future that will never be. Religious extremists believe you can bring salvation by terror. Aggressive secularists believe that if you get rid of religion there will be peace. These are all fantasies, and pursuing them will endanger the very foundations of freedom.

“If we continue to forget that a free society is a moral achievement that depends on habits of responsibility and restraint,” he continued, “then what will come next…will be neither liberal nor democratic, and it will certainly not be free. We need to restate the moral and spiritual dimensions in the language of the twenty-first century, using the media of the twenty-first century, and in ways that are uniting rather than divisive.”

“Rabbi Sacks has left a profound legacy”, said Heather Templeton Dill, president of the John Templeton Foundation, “which we would do well to carry forward because he practiced what he preached. He built friendships with faith leaders; he focused on what the great faith traditions shared in common without asking them to sacrifice their core beliefs, and he imagined a world where religion was not divisive but a source of unity, which would provide a framework for confronting the challenges of the twenty-first century.”

The Templeton Philanthropies extend their condolences to Rabbi Lord Sacks’ wife of 50 years, Elaine Taylor, their children Joshua, Dina, and Gila, and their grandchildren.  We mourn the loss of one of the world’s great voices for moral, spiritual, and historical awareness, and for global peace.